It’s been a while since we’ve done a fashion post on the blog, and this week it’s only fitting that we would relaunch our love of fashion with a glimpse inside The Costume Institute’s spring 2018 exhibition, Heavenly Bodies: Fashion and the Catholic Imagination, which is on view at the Metropolitan Museum of Art from May 10 through October 8.

The collection, for the most part, features designers who were raised on the Roman Catholic tradition, and is meant to spark dialogue about fashion’s engagement with Catholicism. Some of the designers on display include House of Dior, Christina Lacroix, Karl Lagerfeld, Chanel, Versace, Thierry Mugler and John Paul Gotea.

Though the exhibit presents the fashionable styles worn by the Pope, clergy and religious orders, it also displays works that designers have created over the years that were inspired by Catholic imagery and symbolism. It’s an interesting exhibit to walk through. There are papal robes and accessories from the Sistine Chapel juxtaposed against long, flowing silk gowns and ornately embellished pieces. A long-sleeved leather top by Christian Lacroix, for example, features black silk chiffon embroidered with a cross design made out of polychrome crystals and gold seed beads. On the other side of the exhibit, there is a line of several Dominican nun garments that feature the traditional black tunic and white under veil we have come to recognize as a “nun” uniform, so to speak. When you go back and forth between the garments of the two – religious clergy and fashion designers – you are left with so many questions: At what point did it become okay to commercialize religion into a fashion display? Why does the Pope wear expensive designer pieces while there are so many poor suffering? And, who are we to judge what is and is not okay in regard to this?

Deep thoughts aside, there are many show stoppers. Check out the images below to see some of my favorite pieces. 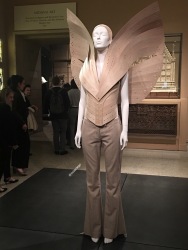 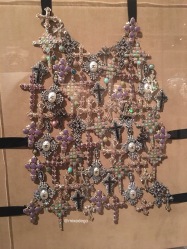 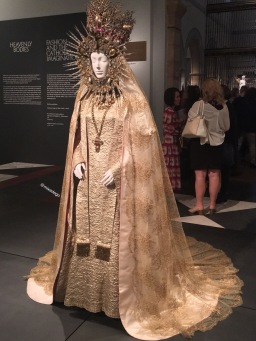 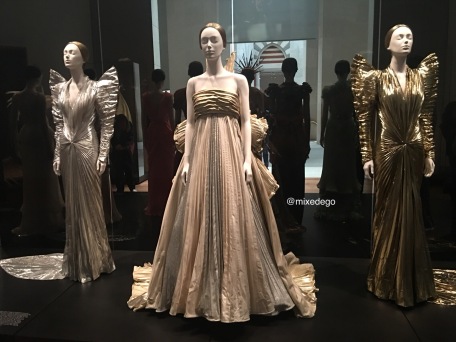